About five years ago, when Nomad Eatery owner Scott Cooper’s younger son left home for college and his wife went to work full time, he realized she didn’t have time to pack healthy, delicious lunches for herself. Food is Cooper’s love language, so he began working on a way for her to take simple, wholesome ingredients to work, individually divided to be thrown together easily.

Those combinations consisted of small amounts of carbs, some protein, greens, and a dressing or sauce. The goal was food that “kept her mouth happy”, was fairly healthy, and wasn’t much fuss. She was thrilled, and he knew he was on to something. 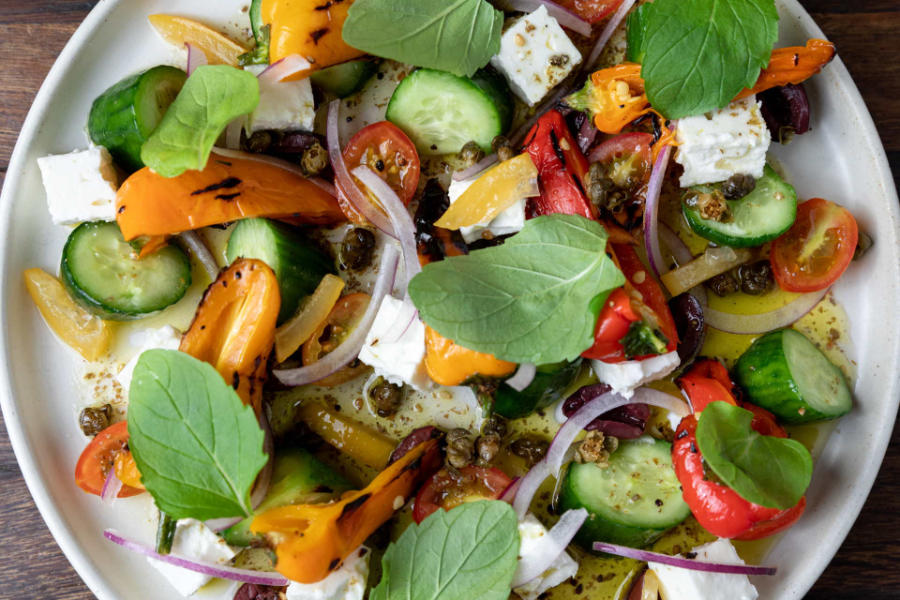 Around the same time, when Cooper was making a dish for himself, he happened to try a wide, shallow bowl that had long sat unused in the cupboard. He loved it. He found he could eat “entrée” style dishes from the bowl, substantial salads, stir fries – it was the perfect vessel for a satisfying meal.

That vessel became the basis for the Nomad Eatery concept. While researching, Cooper found that wide, shallow bowls or plates had been used extensively in ancient Rome and the Mediterranean as the ideal type of holder to eat saucy dishes without spilling. Mediterraneans also placed libations into these low slung dishes, for both imbibing and as offerings to the gods. They named the vessel a patera.

The common thread in pateras is precise portioning — low to moderate carbs, just enough protein, and lots of contrasting flavors and textures — from sauces to vinaigrettes, and from local nuts to vegetables. Pateras allow Nomad Eatery to highlight many cuisines through dishes with great vibrancy, balance and flavor. Like Cooper’s perfectly portioned lunches for his wife, the pateras at Nomad Eatery are designed to be gleefully enjoyed without making the eater feel stuffed afterward. Our pateras are portioned for one or great to share.

“You learn a lot about someone when you share a meal together.” --Anthony Bourdain

Scott Cooper has worked in the restaurant industry for decades, but his passion for food began during childhood. Cooper learned to cook with his mom, making stuffed grape leaves at age 6. This instilled an early appreciation for flavor and cemented the joy of preparing and enjoying food. Cooper began working in restaurants in the 1970s, but it wasn’t until the mid-1980s, when he learned Nouvelle Cuisine from a French chef in Santa Monica, that his lifelong passion for hospitality began.

While backpacking through Europe, Cooper found himself stranded in the outskirts of a small Greek village, hungry and tired. Upon peeking into a small, empty taverna, he was warmly greeted by an elderly Greek woman. Though she lacked teeth, she smiled from ear to ear, and, without speaking a word or accepting a dime, fed Cooper the most memorable meal of his life.

Hospitality, to the team at Nomad Eatery, means understanding a guest’s needs and delivering them through thoughtfully prepared food, good food that is as affordable to as many people as possible.

Thank you for adventuring with us.